The HotBin Mk1 compost bin was emptied yesterday. It had been used for composting food waste starting on 29 May 2020. A total of 78.85Kg of food preparation waste plus tea bags, coffee grounds and a small amount of cooked food had been added approximately every 2 weeks. Shredded paper and wood chips, to balance the C:N ratio and occasionally a couple of hands full of grass cuttings were also used to get things going.

That is not the ideal way to manage a HotBin, the makers say add 2.5Kg – 5 Kg weekly not the 10Kg-15Kg every 14-18 days that I had been doing. Although the contents were heating to 40C to 60C and the material composted quickly the temperature dropped when all the fuel was used. They are right of course, to keep the contents at an even hot temperature it is better to add a less material regularly and that is what I will be doing in future.

This is what I found when I removed the lid

Having admitted that I was not following the instructions how did it all work out? The overwhelming answer is very well! As I have kept records of how much and what went into the bin from 29 May to 8 October I know there that 78.85Kg was added and 63Kg of compost was produced, two good wheel barrows full! That’s 86.5% of the material added.

Now I call that a pretty good result especially as compost made with  food waste is rich in nutrients and it has inspired a new project!

The new Mk2 bin installed and waiting to be filled

First job is to install a new MK2 HotBin. It should be up and running in the next few days. The next part of the project is to clean out the old HotBin and reduce the amount of ventilation by blocking off the extra holes I drilled earlier in the year. After that it will be on a paving slab beside the new bin so the two can be run together.

I have been asked why I bother to compost kitchen waste when we have weekly collections by the local council. First, I do not want to give away such a valuable source of compostable material. Second, the aim is to make the house and garden as near zero waste as possible. In practice it means continually thinking about how we can reduce the amount of waste coming in and recycling everything we can.

The usual disclaimer, we have no association with HotBin other than being satisfied customers.

To encourage more home composting councils are offering discounted compost bins, you can check here to see if your council is part of the scheme. In Derbyshire we can get a 220-litre Blackwall compost convertor for £19 and the 330-litre size for £21 plus a delivery charge of £5.99. When you consider that our district council will be charging £50 a year for emptying the green bin it makes sense to start composting your garden waste.

I ordered the 330-litre bin which was delivered in a couple of days. I wanted to see how easy it was to use and how well it worked. The first fill was a mixture of grass cutting and shredded garden waste.

If you want to know how to make hot compost go to this page.

Now this is an idea I really like especially as our local council say they are withdrawing green bins next year. Well, not actually taking them away but only emptying them if you pay.

From: Permaculture News, see link below

This is an ideal to make them into compost bins and get hot water. It’s not new idea but this looks interesting. I can see a row of them with isolating valves so that they can be switched on when hot and off as they cool down.

Not sure what the effect would be on the compost, first thoughts are that if you remove heat you slow down the process. I would guess that it depends on how much heat is taken.

It could be another crazy project for next year! Full text of the article is here. (You need to scroll down the page.)

The compost at the bottom of bin 2 has always been very wet. When it was emptied last week the reason became obvious, there was a very thin layer of soil on top of solid rock. It might be possible to break it up and remove it but instead a false floor was made. The holes in the bottom slot in board is a trial of controlling the air flow through the heap.

The timber false floor made from old pallets

The two layers of chicken wire was covered with a layer of dry twigs to prevent material falling through.

The bin was filled with a mixture of grass cuttings and shredded tree prunings. Within 24 hours the core temperature had risen to 55C and the next day was 73C which is too high. After making some air holes through the contents the temperature dropped to 69C and is still falling. The ideal is to hold it at around 65C for 3-4 days.

That is all four bins full and working which means we need extra composting space as there is already the start of a pile of general garden waste waiting for shredding. Happy days!

As I have said before composting happens when you least expect it. A few days back I recovered some bags of shredded tree prunings left by a contractor. There were piles of large chunks of wood and some of shredded leaves and small branches. The larger stuff was shredded again to reduce the size.

The thermometer is reading 59.8C

I was surprised by the stream coming off when the surface was disturbed, it has only been there for 3-4 days. Taking the temperature showed that the pile had heated up to 59.8C. My guess is that there was enough nitrogen (greens) from leaves and odd bits of grass the start things off.

The lawn was mowed today and the grass clippings ( greens or Nitrogen) mixed with the wood chips (browns or Carbon) to fill another bin which should get off to a good start.

That’s all four of our bins full which means we have made around four cubic metres of compost so far this year. We need to find space for two more bins!

This comes round every few years usually when an agrochemical company has introduced a new wonder. The link below is from the US but there are still reports of herbicides contamination in the UK. The current issue is stunted plants grown where horse manure has been used.

There are reports from the US about residues of Clopyralid contamination in compost from golf courses and hay meadows.

The answer is simple; only compost material from your own garden but you must not use pesticides in your garden particularly the lawn if you want clean compost. Think of the bees and your kids or grandchildren. Do you want them running round on grass soaked in chemicals?

The compost was made earlier this year so is about four months old. It has been sieved through a 10mm screen. The idea is to make several cubic metres of this a year so all the beds can have the same treatment. We are not quite there yet but with recent improvements to the compost mix the output should increase.  More soon on we have changed the way we make compost.

We harvested the first onion bed a couple of days ago. There were 62 in the bed which is just under a metre square. There are a few smaller bulbs but generally they are a good size.

In the 2009 square metre bed trials  the total was 8.6 kg with an average weight of 126gms. It looks like the figures for this year will be higher as the sets planted into a bed with a good layer on compost. More information when they have dried off.

The onion bed just before harvest.

The crop looks good. They will be stored for use from January next year. There are anther 40 in another bed which should be ready next month. Again, they are for storing as our post BREXIT supply.

Around 80% of onion sold in the UK are imported from EU countries, the rest come from much further afield e.g. Egypt, Kenya and Israel. It is crazy that we import so many when they could be grown here?

There is a relatively easy way for a council, municipal authority or government to do something effective for the environment, compost food waste. Why is it so important? Because if food waste waste were a country it would be the third highest emitter of green house gases next to China and the US.

In the UK; “Of the 10 million tonnes of food waste arising annually in the UK, only 1.8 million tonnes is currently recycled (either by composting or anaerobic digestion). Only 12% of household food waste collected by local authorities is recycled, with the remaining 88% ending up in the residual waste stream.” (WRAP) 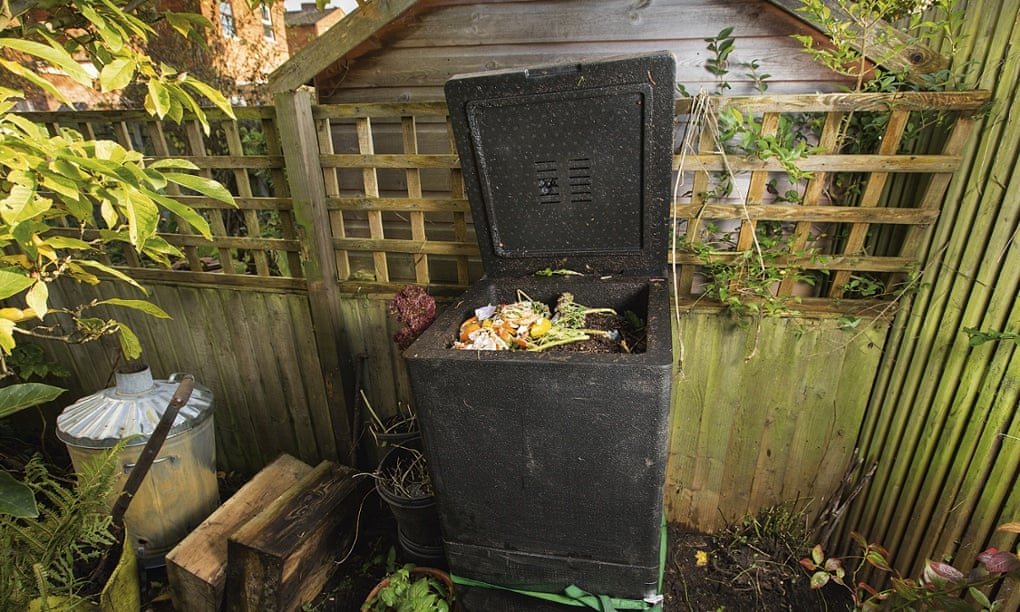 In 2013 we got a HotBin.  See an article by Alys Fowler in The Guardian here. All of our food preparation waste goes into the bin, that is around around 200Kg a year. It has worked ever since, even in the coldest winters. All the compost it produced goes back onto the veg garden.

The usual disclaimer, we are not associated with the company that sells the bins, just a satisfied user!

This is the first successful compost heat recovery system I have seen. I am sure there are others around.

On a smaller scale it got me to thinking about heating the greenhouse from our compost heaps! The way the weather has been this year that would be very useful.