When the Met Office Hadley Centre for Climate Science and Services was opened in 1990, they predicted that within 30 years the UK climate would have changed. They were exactly right, the climate has changed. There are more severe storms, periods of drought, unusual weather patterns and more. So, what does that mean for gardeners who grow food?

The 2019-20 winter was very wet with flooding in many parts of the country. It was followed by a long warm dry spell and drought in the South. Now it is back to cool and wet with cold northerly winds. Some will argue that there is nothing unusual about that, but the difference now is that weather swings from one extreme to another and weather patterns can last for weeks.

This is for Friday 5 May 2020 – click image to see an animated jet stream forecast from netweather.tv

The jet stream moves around more and breaks up. It used to be relatively stable flowing from east to west over the Atlantic. It did sometimes go further north or further south but was generally more stable for longer periods. Now it breaks up and ‘kinks’ often pulling air down form the Arctic with cold northerly air stream across the UK.

Gardeners are used to adapting to the vagaries of the British weather but sudden switches from warm to cold in summer are different. This week saw a near 20C drop in temperature with cold winds and nighttime temperatures in single figures. Add in the rain and the plants sit in cold wet soil which slows down or stops growth.

We need to change the way we grow or risk losing more tender crops. For us that has involved covering potatoes and dwarf French beans with solar pods overnight. The climbing French are more difficult to protect but at least we can try to keep the wind off them by making a tent out of old bubble wrap and fleece. The lettuce table is covered to avoid flooding from the heavy rain.

Unfortunately it looks like we have lost half of the Blueberry crop. There are three bushes, early flowering, mid season and a later variety which keeps us going for three to four months. The early bushed flowered and the fruit set so it looks like a good crop. Probably less than half the fruit set on the mid season bush and most of the flowers on the late bush have died.

Next year we plan to stick to the dwarf varieties and maybe try some more hardy runner beans. Also, we might well decide to plant out in late June which will shorten the growing season but could avoid cold spells. What ever happens gardeners are a resourceful and resilient bunch and will find ways to cope!

There is a lot of talk about regenerative agriculture, particularly in the US, how it improves soils, stores CO2 from the atmosphere, reduces or eliminates the use of pesticides and artificial fertilisers and reduces costs.

What can gardeners take from this? How do we change the way we garden to get the same benefits?

1. Stop digging soil – use no dig raised beds and apply lots of compost particularly in the autumn.

3. Mulch around growing plants with compost.

4. Get to know your garden, learn what works best for you and don’t blindly follow what everybody else does.

5. Remineralise your soil see this page.

There is lots of discussion about eating meat and climate change. Obviously livestock farmers are reacting strongly to the call to reduce or eliminating meat from our diets. These two graphics show how meat compares to other food types in terms of the amount of land needed to produce 1gm of protein and the amount of CO2 produced per square metre of land.

(Click on the charts to go to the site)

What never ceases to amaze me is we have so lost touch with planet Earth that we have forgotten it is literally earth, or soil, that feeds us!

There is an increasing amount of evidence that we are taking too much from soil and giving nothing back. This leads to soil erosion on a massive, world-wide scale. No country is immune. 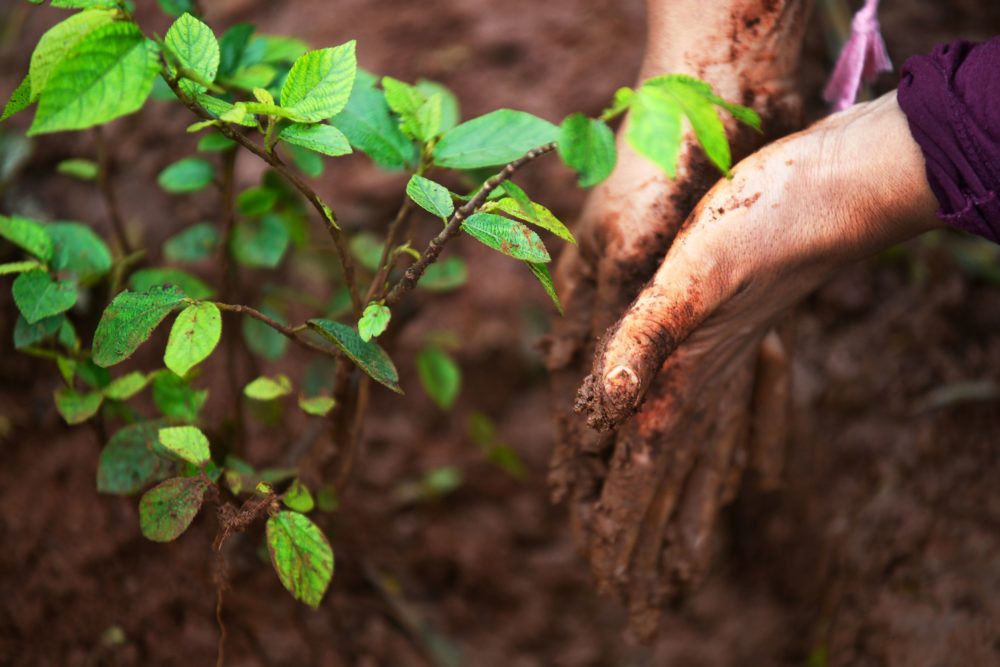 On the web site of Boston’s WBUR radio station is reference to a report from the UN saying that our soils are in trouble.

The health of the Earth’s soil is crucial to storing carbon.

So what does it mean when scientists conclude the Earth’s soil is being lost 10 to 100 times faster than it is forming?

At last the message is getting out! By treating agricultural land differently, we could increase food output, improve spoils and lock in CO2. It is not rocket science! It does not need fancy new technology in fact or needs common sense old technology. No government needs to pass new laws or have any input into this. We could start doing this now! Yes, today, now!

The only groups fighting against it are agrochemical companies because they can see their profits plummeting.

Gardeners can be part of the change by quite simply learning more about what healthy soils. The first thing is to learn how to make and use lots of good compost. Next is to stop digging!

The amount of chemicals used on lawns is staggering. In the US it can be nearly four times that used on agricultural land. The only reason is to make lawns look nice. Visual appearance is the key factor!

There are no figures for the UK, but it is likely that they are very similar. The British are obsessed with lawns and spend millions every year to get the right effect. The typical front garden is still a lawn with flower borders.

Grass grows and lawns need to be mowed, usually every weekend. The first signs of spring used to be marked by the appearance of migratory birds but now it is the song the lawn mower and the strimmer that heralds the new season.

It takes a lot of work to keep the grass looking pristine. That includes the application of chemicals including selective weed killers, insecticides to kill unwanted bugs and fungicides. They may be combined into one product under the ‘weed and feed’ banner. You can also add cats and dog repellents to avoid unwanted dead patches of grass.

Are Lawn chemicals toxic?
There is evidence to show that garden pesticides are dangerous especially to children. In the US many homeowners have lawn care packages which includes mowing, strimming and the applications of chemicals. In some areas local bylaws (ordinances) insist that front garden (yards) look pristine all the time.

Of 30 commonly used lawn pesticides, (See the PDF here) 19 are linked with cancer or carcinogenicity, 13 are linked with birth defects, 21 with reproductive effects, 26 with liver or kidney damage, 15 with neurotoxicity, and 11 with disruption of the endocrine (hormonal) system. Of those same pesticides, 17 are detected in groundwater, 23 have the ability to leach into drinking water sources, 24 are toxic to fish and other aquatic organisms vital to our ecosystem, 11 are toxic to bees, and 16 are toxic to birds.

Lawn Care Chemicals: How Toxic Are They?

A study in the US used markers were added to common lawn treatments to track where it went. Scans of the homes of participants found chemical residues on door handles, floors and carpets. What was even more concerning they found the markers in the stomachs of children who had played on the lawns.

While the results are shocking, they are hardly surprising. If you spread pesticides on your lawn and then walk, sit, or play on them residues will be transferred.

The big questions are why does the visual appearance of a patch of grass outweigh the health effects of using chemicals? And, why is there such a strong desire to conform to an antiquated definition of a nice garden? It is rooted in a post war return to decorative gardens after using them to grow food. That created the huge garden centre and garden products industry that we now have.

“Ornamental horticulture and landscaping in the UK made an estimated £24.2billioncontribution to national GDP in 2017.

Around 568,700 jobs across the country are supported by ornamental horticulture and landscaping, equivalent to 1 in every 62 jobs!

There is a move to grow food in front gardens. In some US cities the rules have been relaxed and people are growing veg ‘out font’.

In the UK there is generally nothing to stop homeowners growing whatever they want except the usual quiet disapproval of neighbours but it takes a certain amount of guts to ‘rock the boat’ and stand out as being different.

The other alternative is to grow wildflowers. They can be sown in irregular swathes across the lawn or replace all the grass. The big advantages are no more mowing, strimming and no need for weed killers and other toxic chemicals!

From the Guardian article:
“The true cost of cheap, unhealthy food is a spiralling public health crisis and environmental destruction, according to a high-level commission. It said the UK’s food and farming system must be radically transformed and become sustainable within 10 years.”
Read more

From the report:
“Our own health and the health of the land are inextricably intertwined [but] in the last 70 years, this relationship has been broken,”
The full report 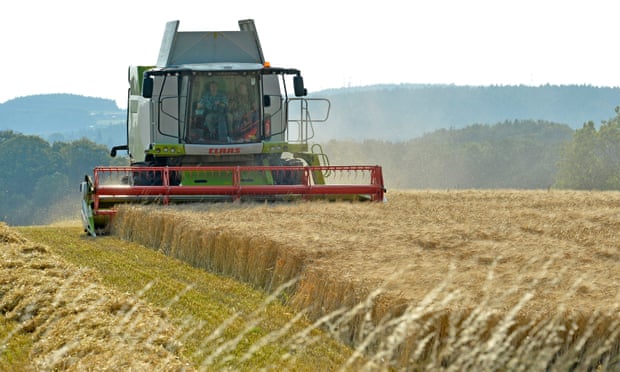 It is a real pity that Ryton Gardens will no longer be open to the public. It was major tourist attraction in the past and Garden Organic will lose a lot by closing it. How many other casual visitors were inspired by what they saw? A much smaller garden, closed to the public except for occasional open days is no substitute.

Maybe it is time for a new group, charity or organisation to take over that role and really get things moving. Take a look at the edible garden display at RHS Harlow Car to see what can be done. I Just wish the gardens were organic.

Do you want the cheapest food possible? If so this is what you get: “Data going back to 1940, as reported by Eco Farming Daily, shows: “The level of every nutrient in almost every kind of food has fallen between 10 and 100 percent.”

This is not anything new, it is well documented and we have mentioned it before – “A study on the mineral depletion of the foods available to us as a nation over the period 1940 to 1991.” see the PDF is here.

There is a stark choice: you either go for the cheapest food and kid yourself that it is good value for money or you buy decent food that is not produced using high inputs of chemical fertiliser and chemical pesticides  –  organic food!

See this piece in Scientific American 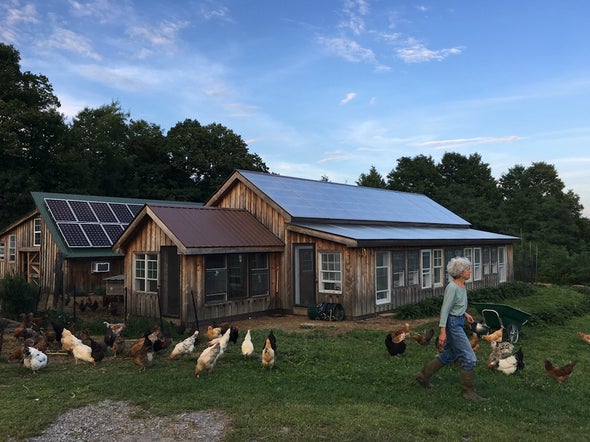 I found this book in last week in Oxford last week, Blackwells Broad Street branch.  it just jumped off the shelf. I have known about biochar for some years but not used it in the garden. With the new plot and talk about sequestering CO2 and making better use of nutrients it could not have come at a better time.

What I like about the book is that there is some history, the use of biochar goes back to 450 BCE – 950 BCE. The soils from that era are still black, it lasts locking up atmospheric CO2 for centuries. There is a section about how it works and very useful practical information about making biochar in either in a burn pit or a TLUD: top lit up-draft gasifier.

Making a TLUD from a couple of steel barrels look relatively straight forward so that is what I will do.

It fits in nicely with the yearly timetable as I am just about to start preparing the soil for the winter. I will post some pics of the TLUD build progress soon.